A Game Of Inches: Furniture And Building Design

With every district a few weeks into Friday Nights Lights, I started thinking about ‘Close Calls’ we’ve had in designing schools.

I’ve been on many projects over the years that have seen the selection of furniture pushed off until well into construction.  On one particular project — not naming any names — we were designing around dimensions given to us by a client for computer tables in a wing of flexible classrooms and computer labs. We took their dimensions and made sure we had a few more inches for good measure throughout design. See, we thought we had been given the actual dimensions, but the Owner had assumed the advertised 5-feet computer tables were exactly 60-inches long when they were actually 63-inches long.  We were a couple of weeks away from finishing the construction documents and doing one of our final reviews with the Owner. A casual conversation after that review meeting saved us from being 3-inches off in every room. The change reverberated through the plans and affected everything from the building envelope to structural. We were able to attain their goal of a flexible lab to lecture instructional space. Thankfully, problem avoided! We can put that in the book as an ‘Overtime Win’.

On another project, I was reviewing casework submittals for a science lab. The owner wanted to fit in as much casework as possible, so we were pushing them right up against the area reserved for, once again, some computer tables. While I was reviewing the dimensions in that submittal I took the opportunity to confirm the dimensions of those computer tables one final time, just in case. I reached out to the owner and, as luck would have it, they had just placed an order for the computer tables and were able to send me the product sheets on the tables they ordered.

Well, the owner changed their mind at the last minute and ordered a different model, about half an inch wider per table.  With four tables that came out to 2-inches. I went back and checked the dimensions on the casework shop drawings for the area reserved for the tables. I marked them up to add 2-inches. And we avoided what could have been a big headache. We’ll call that our ‘Goal Line Stance’.

I’m not sure I can count how many times we have designed a cafeteria to hear later that the district couldn’t go with the tables they (later decided) wanted or had to use fewer tables because the space was off by a foot or so in allowing them to fit another row. And this happens despite our best attempts to get furniture selected early in the process.

Even though furniture has become a key element in designing 21st century spaces that are flexible for the delivery of instruction for over a decade now, far too often furniture isn’t considered part of design, and often just isn’t considered at all until construction is already under way. In our efforts to push owners to think about furniture earlier in the design phases we have run into more than one situation where, had we not pushed, a space would have been constructed just a few inches smaller than what would fit the furniture. That’s just ‘Short of a First Down’ by a few inches.

A few inches are easy to take into consideration when a project is still in design. But when a building is under construction, it can become a major issue. If walls have to be moved it could result in added costs, delayed schedules. 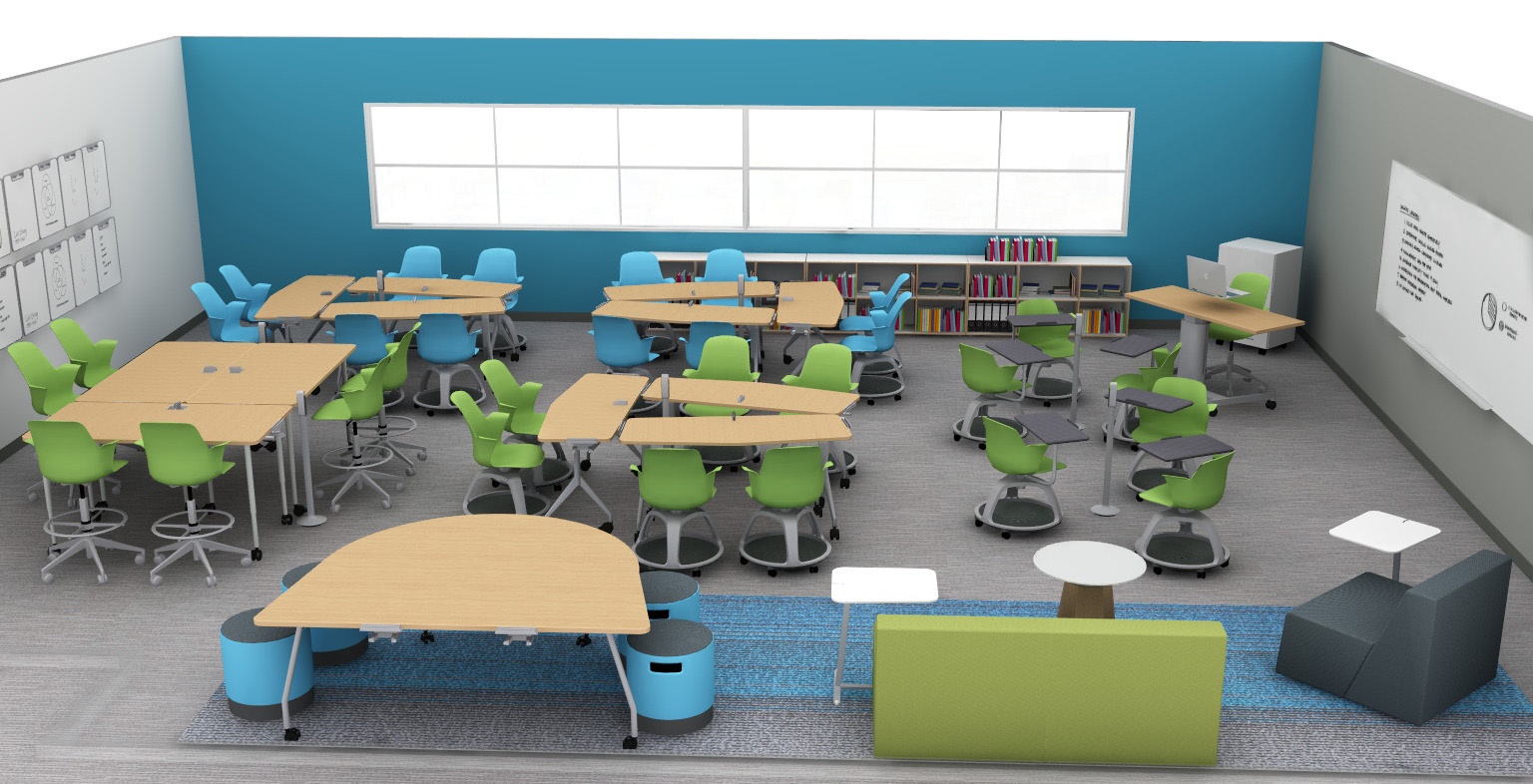 Taking furniture into consideration during design adds to the experience and function of a space.  On the other end of the spectrum, selecting furniture late in the process can cause unnecessary headaches on the project. Why not use a whole-building approach that test fits the pieces during the design of the spaces and, even further, fully considers how the spaces will function with the furniture, instead of just designing voids to be filled later?  ‘Do it NOW, Do it RIGHT.’

We understand that furniture selection is time consuming. We also understand that running a school or an entire school district while also being involved in the design of a building project and furniture selection can be one too many projects to fit into a day. One too many things to think about. And, historically, schools have selected furniture on their own when a building is nearing completion. That’s the way it has been done for as long as I have been around. But momentum doesn’t have to be a rule, especially when the momentum is taking you away from the endzone.

As Architects, we say bring your Architects into the furniture selection process. And do it during design. Let them work with your furniture vendor to put together some options. Or, relieving yourself of even more responsibility, make furniture selection and design your architect’s problem altogether. Honestly, to see a project designed and executed well, it is something we are happy to take on.

“Football is a game of inches and inches make the champion.” ~Vince Lombardi